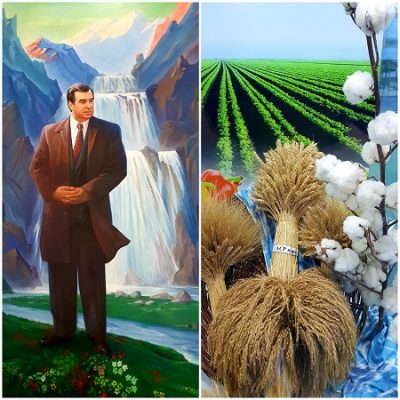 The post-Soviet Central Asia is seen by many as the ultimate middle of nowhere. When the region isn’t being ignored, it’s being mocked, with Sacha Baron Cohen’s Borat being a case in point. This lack of outside scrutiny has produced textbook autocracies where presidents-for-life continue to build personality cults as bloated as those of their Soviet predecessors but also, more worryingly, inform public aesthetics. Having previously written about dictator chic in local architecture, I now focus on national museums.

Yeah, I get it. When the Soviet Union collapsed in 1991, 15 of its constituent countries were left to sift through the rubble of some seven decades and construct new national identities. There’s no denying that the clash of Soviet past with sudden modernity was epic. It’s open to debate, however, whether countries such as Uzbekistan or Tajikistan are to be considered post-Soviet at all since they remained, for decades since 1991, under the same leaders who took them out of the USSR in the first place.

Take the State Museum of History of Uzbekistan in Tashkent, Uzbekistan, or the National Museum of Tajikistan in Dushanbe, both of which I visited in one sweep across the post-Soviet Central Asia. The perennial questions of museology about what and how to exhibit in a country’s national museum for maximum cultural impact seem to have been answered here not by informed curators but by the authorities who still have the same suffocating grip on the fabric of public life in both nations they used to enjoy in the Soviet days.

How else does one explain corny presidential portraits with gushing waterfalls in the background – like the larger-than-life picture of Tajik President Emomali Rahmon or the bizarre cotton wool arrangement documenting annual cotton harvests in Uzbekistan for which, as anyone in the country will tell you, the entire population was mobilised by President Islam Karimov in conditions not unlike forced labour? Both exhibits are part of the jingoistic museum displays in Dushanbe and Tashkent, respectively.

The Rahmon portrait in Dushanbe is a classic tribute to the achievements and personal attributes of post-Soviet dictators visible across Central Asia. Unlike earlier, Soviet-era leader cults whose displays were largely limited to public art, the current expressions of adulation for the region’s post-Soviet presidents are flooding every possible media platform, including the internet, as well as gracing a startling array of everyday consumer products. It appears that things in Central Asia have moved with the times after all.

The cotton harvest display in Tashkent is, similarly, indicative of the power of Central Asia’s presidential republics where decisions about public good tend to be top-down affairs. The Soviet governments did deliver public services but were dismissive of the actual needs of their citizens. The post-Soviet Central Asia has inherited this lack of public involvement in decision-making. How else could a president order the whole country to drop everything and pick cotton? The national museum only tells us that he did.