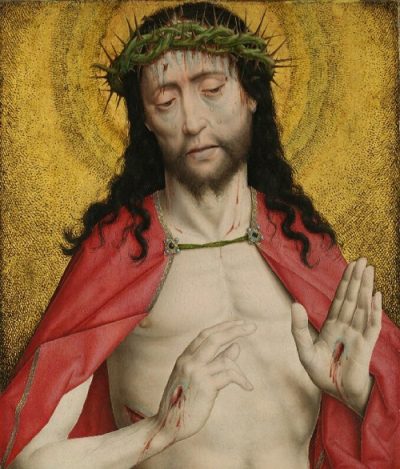 On a personal level, one’s discovery of a new favourite artist is akin to a newly discovered painting by a famous artist we occasionally hear about in the news. One of my regular visits to the National Gallery in London was such a transformative experience in the form of Christ Crowned with Thorns by Dieric (also spelled Dierick, Dirk, Dirck, or Thierry) Bouts.

The typical style of this 15th-century Flemish ‘Primitive’ is an antithesis of later, Mannerist dramatism in that it exudes an atmosphere of absolute restraint. Bouts’s elongated, reflective figures; rich, controlled colours; and dignified, understated emotions have nicknamed him the ‘painter of silence’.

The tightly cropped Christ Crowned with Thorns stands tall, statuesque and turned inwards. The harmonious and balanced composition is rendered in a rich and warm palette of colour. Christ’s figure dominates the small frame and nothing in the background detracts from the powerful representation of the man with a crown of thorns.

In contrast to the classical revivalist painting of Italian Renaissance, Bouts’s Flemish Christ is more continuous with medieval art known for its willowy and stiff-looking figures. This more flattened and less perspective-obsessed image of Christ allows the figure draped in a sumptuous crimson fabric to emerge from the decorative scheme of an expansive golden halo.

Christ’s face demonstrates how the portraits in Flemish art have much more rugged individuality than in Renaissance Italian art; the people they represent are often plain and sometimes positively ugly in a way few Italian portraits of the day are. And yet this contemplative and visibly suffering Christ is more in line with the Christ’s rather stern image in the Gospels than the beautiful, muscular figures pioneered by Michelangelo and his fellow Italians.

For me, this human figure is not dwarfed by or subordinated to the ruthless application of the new knowledge of mathematical perspective that defines Renaissance art. The lack of physical motion or outward emotion likewise does not take away from the desired depth of this painting. This is a highly individualised representation of Christ without the dramatic impact of Italian Renaissance or clinical sterility of medieval art.