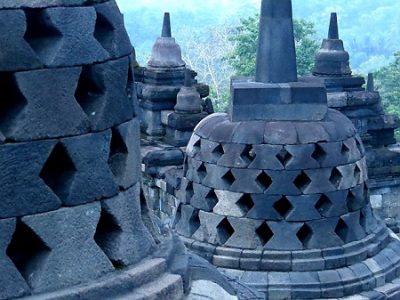 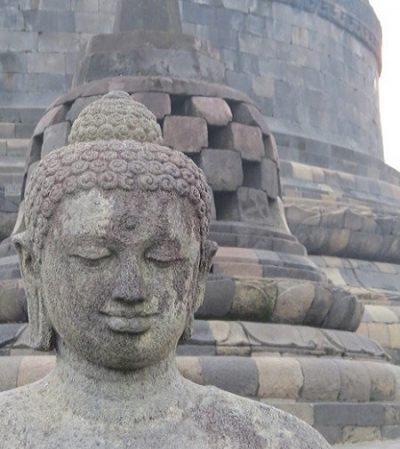 Resembling a step pyramid assembled from two million blocks of stone, Borobudur is the world’s largest Buddhist temple and one of Indonesia’s major landmarks. With three circular and six square platforms and a central dome on top, its scale is overwhelming. It’s decorated with over 2 500 relief panels and 504 statues while the dome is adorned by 72 Buddhas, which are placed inside stupas – the bell-shaped enclosures, meaning “heap” in Sanskrit, that give Borobudur its iconic look.

Architecturally, Borobudur was conceived as a Buddhist vision of the cosmos. Viewed from above, its overall plan is that of a mandala – a mystic Buddhist symbol of the universe, combining the square as earth and the circle as heaven. This is a practical representation of the cosmos used for meditation and it’s where the richest understanding of the monument occurs: Buddhist pilgrims tread a path from the everyday towards a contemplation of nirvana at the monument’s crowning stupa.

At Borobudur, theology and geometry instruct Buddhist pilgrims towards the ultimate goal of enlightenment. Devotees ascend the site clockwise along its open-air walkways towards its uppermost level. Meticulously carved relief sculptures illustrate a physical and spiritual journey that guides pilgrims progressively towards higher states of consciousness. The passage isn’t unlike contemplation of the Passion of Christ through the Stations of the Cross towards Mount Calvary in Christianity.

The temple was built during the 8th and 9th centuries but fell into disuse one hundred years after its completion when, for still unknown reasons, the rulers of Java moved to another part of the island. It was buried under volcanic ash from about 1000 AD and overgrown with vegetation until discovered in 1814 by Thomas Stamford Raffles, then the governor of the Dutch East Indies. Dutch archaeologists restored the site in 1907-1911 and its second restoration was completed by 1983.

The impressively restored temple feels most special at sunrise, which is when I made it to the top. By all accounts, including my own, the idea of moving from the darkness into the light is the final element of the experience of Borobudur. Whatever one’s beliefs, the view from the summit, especially on a humid day when mist rises from the surrounding paddy fields, is sublime. Set inside a tropical forest, the temple is as much a monument to the Javanese nature as it is to Buddhist doctrine.