Bon: A byword for Venetian Gothic 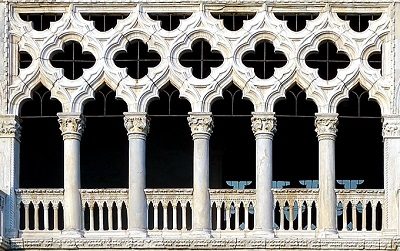 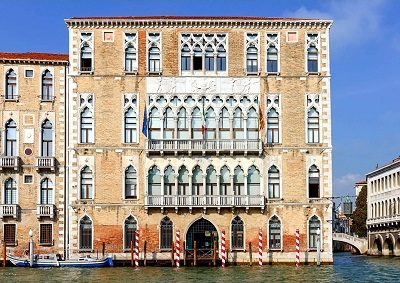 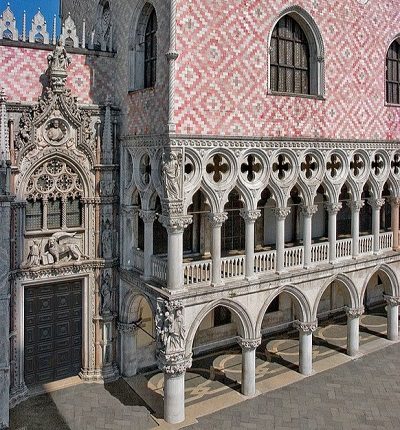 Bon: A byword for Venetian Gothic

As an architectural style, Venetian Gothic is largely synonymous with Bartolomeo Bon and his palaces along the Grand Canal and church portals all around Venice. As an architect and sculptor, Bon made the best of Venice’s unique building requirements to fuse the local variant of Italian Gothic with Byzantine and Islamic influences. Rather usually for medieval architecture, Bon’s Venetian Gothic shines most in the secular buildings: he was the designer of two of Venice’s most peculiar palazzi – Ca’ d’Oro and Ca’ Foscari. Just as instantly recognisable are his elaborate entrances to SS. Giovanni e Paolo, San Polo and Santo Stefano as well as the Porta della Carta of the Doge’s Palace.

Bon’s architectural designs work around the two main features of Venetian topography: They rest on building sites supported by large numbers of timber piles driven into the alluvial mud and they conform to the formula of palazzo-fondaco where residential palaces doubled as places of business, on the ground floor, and homes above. With the bulk of decoration reserved for the front façades, Bon’s palazzi feature loggias of closely-spaced small columns, with heavy tracery with quatrefoil openings above and decoration along the roofline. Together with the ogee arch, capped with a relief ornament, and ropework reliefs, these are also the most iconic characteristics of the Venetian Gothic.

Bon’s iconic Ca’ d’Oro has long been regarded as the best surviving palazzo in Venetian Gothic architecture, retaining all the characteristic features of the style. On the ground floor, a recessed colonnaded loggia gives access to the entrance hall directly from the Grand Canal. Above this colonnade is the enclosed balcony of the principal salon on the piano nobile. The columns and arches of this balcony have capitals which in turn support a row of quatrefoil windows. These use the famous design from the Doge’s Palace. Above this balcony is another enclosed balcony or loggia of a similar yet lighter design. The palazzo also features Islamic-inspired decoration along the roofline.

Bon’s other Venetian Gothic masterpiece – Ca’ Foscari’s – has a façade with a sequence of arches and windows. This style, known as Floral Gothic, is emulated throughout Venice, identified through the use of pointed arches and carved window heads. At Ca’ Foscari, the tops of each column are decorated with carved quatrefoil patterns while the Gothic capitals are adorned with foliage, animals and masks. Above the Gothic window is a marble frieze with a helmet surmounted with a representing the doge. At each side of the central helmet there are two putti holding a shield symbolising the Foscari’s coat of arms with the winged lion of St Mark, symbol of Venice.

No less impressive are Bon’s church entrances around Venice. At Santo Stefano and San Polo, the delicately carved portals are mere attributions to Bon whereas at SS. Giovanni e Paolo the great west doorway is certainly his work. At the Frari, he has contributed statues of the Virgin Mary with the Child on the left and St. Francis on the right of the ogival arch of the front entrance. At the Doge’s Palace, Bon has built and adorned the Porta della Carta, the ceremonial entrance into the courtyard. It is a credit to Bon’s genius that Venetian Renaissance architecture, which emerged shortly after his death, has so often retained reminiscences of its Gothic predecessor.