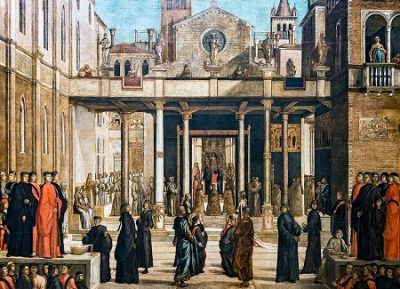 Padua born and trained Lazzaro Bastiani was one of the six late 15th-century Italian painters whom the Venetian Scuola di San Giovanni Evangelista commissioned to immortalise the series of miraculous events attributed to their chief relic. It fell to Bastiani to depict the most important moment in the history of the relic of the Holy Cross: the ceremony at which it was offered to the scuola by great chancellor of the order of Cyprus and Jerusalem Philippe de Mézières in 1369.

The two fragments of wood, believed to be relics of the cross on which Christ died, were received by the scuola with solemnity as is evident from Bastiani’s Donation of the Relic, now in the Accademia. The handover, which takes place inside the church of San Giovanni Evangelista, is seen in Bastiani’s painting from outside and documents the appearance of the church before its later restorations. One particular mission is Pietro Lombardo‘s marble screen by which the site is recognisable today.

What we see in Bastiani’s painting is the church’s brick edifice, fronted by a portico decorated with frescoes and surmounted by a terrace with a richly ornamented surrounding balustrade, which contained the cemetery. Inside the church the polygonal apse can be glimpsed, together with tall, narrow windows and on the altar a polyptych which is reminiscent of the one included by Gentile Bellini in one of his contributions to the same cycle of paintings – Miraculous Healing of Pietro de’ Ludovici.

The interest of Bastiani’s painting lies principally in its value as an irreplaceable historical document offering evidence of an urban Venice which has since disappeared for ever. In this sense, Bastiani’s depiction of the city’s historic topography is akin to later, 17th- and 18th-century painters of Venetian cityscapes, or vedute, who similarly and inadvertently captured views of Venice that now no longer exist. Together with them, Bastiani’s painting functions as pre-19th-century photography.

Bastiani’s other achievement is his evocation of solemnity during the handover ceremony. His Venetians receiving the relic are the people who were known to take themselves rather seriously. This a Renaissance composition through and through, with the arrangement of figures reminiscent more of Raphael’s The School of Athens than the parallel depictions of these miracles by Vittore Carpaccio or Giovanni Mansueti. His painting captures a lost Venice and a lost solemnity in equal measure.