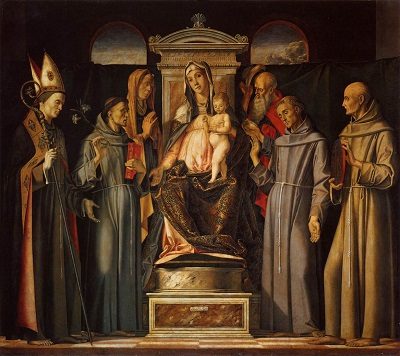 Alvise Vivarini was the last and greatest painter of the only Venetian artistic dynasty to rival that of Jacopo Bellini and his sons. Influenced by Antonello da Messina, Giovanni Bellini and Andrea Mantegna and the harmonious, three-dimensional quality of their works, Alvise gradually surpassed the linear Gothic style and iconography of his father Antonio and uncle Bartolomeo to develop a more volumetric style in which the light defines and shapes the figures. His later figures, particularly his sacre conversazioni such as the Virgin and Child Enthroned with Saints, which now hangs at the Accademia, became imbued with a remarkably poetic quality.

This painting, dated 1480, originally came from the Church of San Francesco in Treviso. A classic sacra conversazione, it is composed, with geometrical symmetry, of two groups of saints – Louis of Toulouse, Anthony of Padua and Anne on the left and Joachim, Bernardino and Francesco Gioacchino on the right. Both groups are facing inwards towards the enthroned Virgin and Child. This is a far cry from Alvise’s early, linear work of heavy plasticity. The influence of Antonello’s San Cassiano Altarpiece, which was studied and admired by a whole generation of Venetian painters, is obvious from Alvise’s adaptation of Antonello’s crystalline form and colour.

There is a clear transition from the Late Gothic towards the Renaissance principles of spatial construction and light. In their gestures, immobilised by the cold light coming from the top left-hand corner, the three-dimensional figures in this painting appear to form a kind of architecture centred around the Virgin’s throne. The exaggerated outlines are softened by the interaction between the figures. Behind the throne a dark green curtain falls heavily, excluding from sight all natural elements apart from two small fragments of a cold, clouded sky. Recent examination has revealed that the curtain in the background was added at a later date.

There is also a firm geometrical relationship between space and figures whose shadows appear on the floor. Although Alvise’s figures in the Virgin and Child Enthroned with Saints are painted in a more dynamic manner than anything he had done before and there is evidence of clearly defined forms and definition of space learnt from Mantegna, the Venetian colorito (colouring) and sublime naturalness represented by Giovanni Bellini are still far off. This is a transitional but highly innovative and groundbreaking sacra conversazione which shows the evolution not only of Alvise’s personal style but of the Venetian painting as a whole at the end of the 15th century.