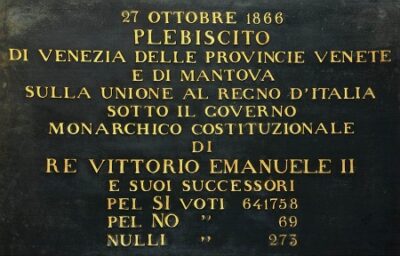 By 1866, with the unification of Italy well underway, the present-day map of the country was still missing a rump of the Papal States around Rome and the city of Venice with large parts of what used to be its territory on the Italian mainland. This would change with the Third War of Independence, nominally a war between the emerging Kingdom of Italy and the Austrian Empire but largely dependent on the outcome of a simultaneous conflict between Austria and Prussia and the involvement of France.

After the surrender of the revolutionary Republic of San Marco under Daniele Manin in 1849, Venice was once again annexed by Austria. The unification of Italy, which began in 1859 with the northern Italian states joining the Kingdom of Piedmont-Sardinia, seemed to make no dent on Austria’s grip on Venice. The balance of power would only shift in 1866 when the nascent Kingdom of Italy teamed up with Prussia in its own war with Austria – and lost badly to the Austrians in the Battle of Custoza.

With Prussia victorious and Napoleon III of France acting as intermediary between Prussia and Austria, the Austrians refused to surrender Venice directly to Italy since the Italian army had not defeated their army. The Italians felt humiliated by their absence in the Austro-Prussian peace talks and that they should receive Venice as a gift from France. Italy thus demanded it would only annex Venice after a referendum in order for the annexation to appear as the will of the people rather than a French gift.

The Venetian plebiscite, now commemorated on a marble plaque at the Doge’s Palace, was held in October 1866 and the result was overwhelmingly in support of joining the Kingdom of Italy. With just 0.01% of Venetians voting against, some have suggested the referendum was conducted under the watchful eye of the Italian military as the annexing power. It’s been argued that it was just a formal endorsement of an Italian occupation of Venice that had already taken place on the ground.

If the referendum was a mere administrative affair to Italy designed to formalise its sovereignty over a territory already under its possession, was it a free vote and were the Venetians given a real choice? It may have been a case of Italy saving face after its poor military showing during the Third War of Independence. For Venice, choosing Italian rule over Austrian one may have been the lesser of two evils. But with the unification almost complete, could there have been an Italy without Venice?