1204: Venice sacks Constantinople in own crusade 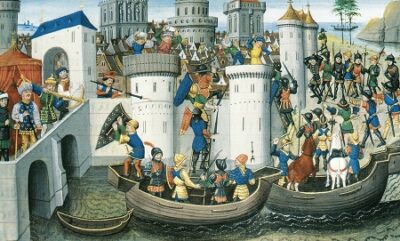 1204: Venice sacks Constantinople in own crusade

The infamous Fourth Crusade is dubbed the Venetian Crusade due to the leading role played by Venice in this venture which concluded with the sack of Constantinople in 1204 – a turning point in medieval history. The crusaders’ decision to loot the world’s largest Christian city was beyond controversial and reports of crusader brutality damaged relations between the Catholic and Orthodox churches for centuries to come. Despite the bad press, these events were less deliberate than accidental.

The first miscalculation was Pope Innocent III’s. The Fourth Crusade was initially sought by him but he forbade it when the Republic of Venice turned the anti-Islamic crusade into a private campaign of political and commercial expansionism. The second miscalculation was Venice’s which in 1201 agreed to transport 33 500 crusaders to the Holy Land. This required a full year of preparation by the Venetians to build the necessary ships and train their sailors while the city’s commercial activities were put on hold.

The crusades peaked between the 11th and 12th centuries when they were fuelled by Muslim intolerance of Christian pilgrims in the Holy Land. Venice came on board later than other seafaring powers, such as Genoa, and only after it had weighed the full implications. At the time of the Fourth Crusade, the dominant Muslim power in the eastern Mediterranean was Egypt. It was a major trading partner of Venice but its fall into Christian hands would give Venice a dominant position at Alexandria.

The trouble started when only 12 000 crusaders assembled in Venice in 1202. The army was too small to pay its fee but disbanding it would harm Venetian prestige and cause financial loss. Doge Enrico Dandolo urged the crusaders to pay their debt by taking the ports down the Adriatic that weren’t under Venetian control. This led to an attack on Zara, which had recently repelled the Venetians. The sack of this Christian city appalled the pope who threatened the crusaders with excommunication.

With excommunication looming and the debt still unpaid in full, the crusaders decided to put Alexios IV, the son of a deposed Byzantine emperor on the throne in exchange for financing the crusade. In 1203 they attacked Constantinople but the new emperor was later killed in an uprising. The crusaders then sacked the city in 1204 and divided the spoils. In addition to an immense booty of gold and artworks, Venice gained an uninterrupted chain of ports all the way to Constantinople and beyond.