Why are there so many churches in Venice? 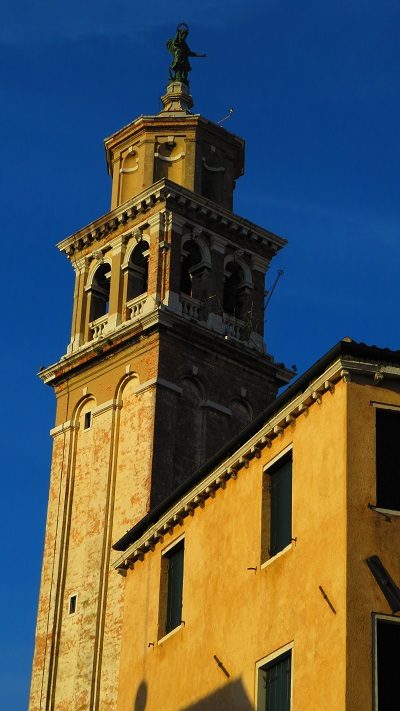 Why are there so many churches in Venice?

We all know how this goes in Venice: you’re lost in what looks like a dead end of a narrow street when you suddenly emerge in a tiny campo with an oversized, imposing church façade in front of you. For a compact city of some six square kilometers, Venice does seem rather heavy on churches, 139 of them to be precise. They are literally everywhere. With 51 deconsecrated churches that have been converted to other uses such as music halls, there are still 88 churches that hold mass at least once a week. Open for business or not, Venetian churches do remain the greatest repositories of art in town. Even with most of the art that is now hanging elsewhere, Venice’s churches are its original source.

Coming back to the question why there are so many of them in Venice, one of the reasons, apart from Venetians’ piety, is that each island community, before the city was unified, built its own place of worship. This was a smart way of bringing the community together around a patron saint. Churches were often funded by resident merchants to showcase their faith – and their wealth, by constructing dramatic interiors or elaborate façades. The Church of Santa Maria del Giglio is a case in point. In addition to being a marvel of the Venetian Baroque, its riotous façade lacks any Christian iconography and is more of a monument to the prominent Barbaro family who financed it than a church exterior.

The oldest churches in the city, such as Angelo San Raffaele or San Giacomo di Rialto, were first established in the 9th century. This was roughly the time when Venice as a loose association of island communities is said to be unified into a single military unit under a doge. While these original church buildings are no longer standing, their traditions have continued through the years. As a rule, Venetian churches tended to be rebuilt with the changing community needs and artistic tastes. The original churches of wood thus made way for larger and more resilient stone structures. One of the last thatched roofs in a fast changing city was recorded on the Church of San Salvador as late as 1365.

The churches of Venice have also been subject to disasters. Collapses due to subsidence have claimed many a church structure, with some, such as the bell tower at the Church of Santa Maria della Carità, never rebuilt. The densely packed Venetian architecture was susceptible to fires, to the extent that all glass manufacturing furnaces had to be repatriated to the island of Murano in 1291. But fires continued to burn, with 21 churches burned to the ground in a single fire in San Marco in the 15th century. Other churches, such as San Geminiano and Santa Lucia, were deliberately razed to the ground to make way for new structures – the Napoleonic Wing and Santa Lucia train station, respectively.

Another event in Venice’s history that affected many of the churches was Napoleon’s occupation of the city in 1797. Having effectively ended Venice’s independence, he proceeded to suppress many of the city’s churches and convents. Although many of them were reopened later under the Austrian rule, some remained converted to other uses to this day. Napoleon also ransacked several churches and confiscated or sold their artworks. This is one of the reasons why so many altarpieces have been removed from their original settings and are now exhibited elsewhere in Venice or further away. To keep things religious, it is nothing short of a miracle that as many as 139 Venetian churches still survive today.