Whistler’s Venice is a night-time mystery 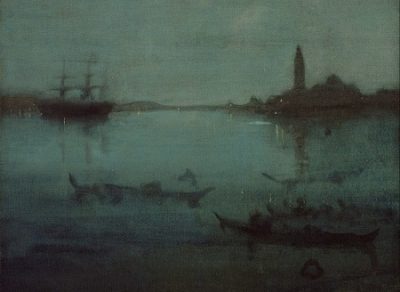 Whistler’s Venice is a night-time mystery

American artist James McNeill Whistler, known primarily for the iconic Whistler’s Mother, was also an accomplished painter of Venice. Having lived in the city as a dandy in the late 1870s, he captured Venice, often at night in his famous nocturnes, with Impressionism’s disregard for objective accuracy and in a heavily atmospheric style that would become known in the late 19th century as Tonalism. Whistler tried not to go for the over-familiar sites and, in doing so, helped to reinvent Venice’s tourist trail.

While with Whistler detail is never entirely lacking – since his views of Venice do reveal instantly recognisable places – his aim is not to preserve some kind of historical record. It is to create a mood and a sense of mystery. For this purpose, Venice seems an ideal subject: the city is like a mirage we’re never quite sure really exists. It rises from misty waters and threatens into dissolve into misty air. Where Whistler succeeds as a painter of Venetian cityscapes is in rendering Venice’s own fantasy of itself.

Two Whistlers, in my mind, make this point: Nocturne: Blue and Gold, St Mark’s, Venice (National Museum Wales, Cardiff) and Nocturne in Blue and Silver: The Lagoon, Venice (Museum of Fine Arts, Boston). The former, unlike most realistic views of St Mark’s that place the basilica centre stage, creates an oriental illusion of the church without much concern for a time or a place. The latter, unlike conventional views of the Lagoon, suggests a rather ordinary dream without much focus on its majestic greatness.

With so much cynicism and nonchalance, Whistler’s art was bound to shock the Victorians for whose consumption it was offered in London. Ruskin, the architecture critic and another Venice addict, who had championed Turner, wrote of Whistler: “I have never expected to hear a coxcomb ask two hundred guineas for flinging a pot of paint in the public’s face.” Whistler promptly sued Ruskin for libel in what was Victorian England’s second most scandalous court case after that brought against Oscar Wilde.

The case was heard at the Old Bailey where many figures from the art world gave evidence and the popular press discussed the value of art. Whistler won but was awarded nothing in compensation while his blurry night views or nocturnes, ridiculed in the Victorian press, became unsaleable. He was subsequently declared bankrupt. Ruskin who was appalled by what he saw as Whistler’s moral victory, resigned his professorship at Oxford and so the fallout from the case affected both of them for the rest of their lives.