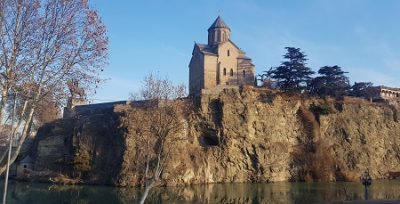 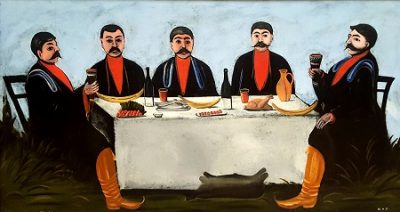 Tbilisi, Georgia’s miniature East-meets-West capital, packs a mighty punch when it comes to history, ambience and hospitality. Arriving at the Tbilisi airport, I was handed a bottle of Georgian red by the uniformed woman who stamped my passport. Going forward, the local appreciation of the finer things never ceased to amaze. Tbilisi’s cobblestone streets, dome-shaped bathhouses and even the Soviet grit – all of it was always interspersed with restaurant tables heaving with Georgian wine and food.

Located on the edge of continents, trade routes and empires, Georgia has, throughout its history, been conquered and reconquered by many intruders. With the Persians, Arabs, Ottomans and Russians first arriving as enemies but staying on as friends, it’s been suggested that the country’s hospitality is a byproduct of geography. As a small country of less than 4 million people today, Georgia may have learned that welcoming foreigners with good food and plentiful wine was easier than fighting them.

“Like Mexico City or Kuala Lumpur, Tbilisi is one of those places where you get a meal – a simple khachapuri – from the humblest hole-in-the-wall and you’re in for gastronomic poetry”

The revolving door of invaders described above is best visible at the Narikala Fortress which still dominates Tbilisi’s skyline. The fortress dates back to the 4th century when it was a Persian citadel. The outside walls were built in the 8th century by the Arabs whose palace inside the complex then changed hands between Georgians, Ottomans and Russians until the early 19th century. Then an accidental explosion of gunpowder stored there blew up the palace, sparing only the fortifications still on site today.

Abanotubani, Tbilisi’s Old Town below the fortress, is a study in contrasts. While this dense urban landscape is quintessentially European, its delicate woodwork still gives it a Caucasian feel. As Georgia sought the protection of the Russian Empire against Persia at the beginning of the 19th century, Tbilisi’s multi-storey architecture became heavily Europeanised. But its Caucasian sense of improvisation, with staircases and balconies ensuring private access to every floor, never disappeared.

Also, the picture-perfect Old Town, where I naturally based myself, is half in rubble and half under renovation. Decades of neglect and overpopulation have taken their toll here – the former mostly under Soviet rule and the latter due to the historic multi-occupancy later made worse by Soviet housing policies. As elsewhere in the USSR, the infamous komunalka broke up old apartments into tiny units with shared bathrooms and kitchens. Renovations are recent and the result of the post-Soviet revival.

Nowhere is this revival more pronounced than in the Georgian Orthodox churches scattered all over Tbilisi. Their distinct conical dome raised high on a drum is known for rich, icon-decked interiors and multitudes of headscarved women worshippers. They are nearby as ubiquitous in this town as Georgian restaurants. Like Mexico City or Kuala Lumpur, Tbilisi is one of those places where you get a meal – a simple khachapuri – from the humblest hole-in-the-wall and you’re in for gastronomic poetry.