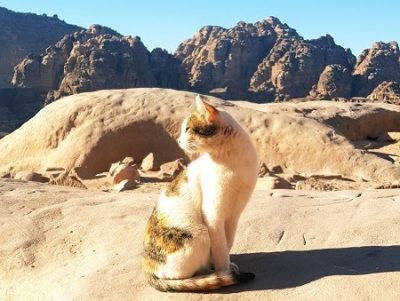 The ancient city of Petra, carved out of red-rose sandstone in southern Jordan, is as famous for its rock-hewn buildings as it is for its water conduit system. Trodding through its dusty thoroughfares, it’s hard to imagine this place as an oasis with lush gardens. The surrounding desert is visited by occasional flash floods, but the Nabateans who carved Petra’s temples, tombs and stables from the soft stone cliffs in the 3rd century BC controlled these floods with the use of elaborate dams.

The Nabateans were originally a tribe of Arabian nomads who settled in the rugged mountains of modern-day Jordan where they became fabulously wealthy from taxing the Silk Road caravans that passed through their territory. They invested into local real estate and with the help of stonemasons from Alexandria chiselled away at the rocky mountains to cut niches, level off plateaux at the cliff tops and create magnificent structures with trademark plinths, columns and pediments.

“Nothing quite prepares you, after a 3-hour sleepy bus ride from Amman, for the sheer wonder of Petra as the sun slides down its columns and then disappears into the gloomy shade”

After a meteoric rise to power, the Nabateans briefly challenged the might of Rome before they faded from history. Petra was struck by an earthquake in 749 AD which accelerated its decline. The site was abandoned and remained unknown to the Western world outside local communities until 1812 when a Swiss explorer Johann Ludwig Burckhardt, disguised as a Muslim, rediscovered it for archaeology and tourism. Petra is the site’s modern name derived from the Greek word for rock.

The city is approached through the long and winding Siq – a narrow gorge hollowed out by tectonic forces and flash floods. Just when you begin to think there’s no end to the Siq, one of Petra’s two best sights, the Treasury or Al Khazneh, looms into view. Built to be a tomb, the structure gets its name from a theory that an Egyptian pharaoh hid his treasure in the urn on top. The Treasury’s classical Greek columns, plinths and friezes are timeless masterpieces of stonemasonry.

The path then passes the Amphitheatre and the Royal Tombs and begins to climb to Petra’s second highlight, the Monastery or Al Deir. The climb is about 45 minutes of hard work up steep rock-cut steps where you evade marching donkeys and their poop. Similar in design to the Treasury but larger, the Monastery was also a Nabatean tomb even if it may have later been used as a Byzantine church. It’s most sun-lit in late afternoon unlike the Treasury for which early morning works out best.

The play of light and shadow on the sandstone façades is Petra’s ultimate draw. From the moment when the dusky Siq enters into sharp daylight at the Treasury, the sun never stops to enliven the honey-coloured stone. Nothing quite prepares you, after a 3-hour sleepy bus ride from Amman, for the sheer wonder of Petra as the sun slides down its columns and then disappears into the gloomy shade. This ancient city is a masterclass in stonemasonry where light and darkness alternate on an epic scale.