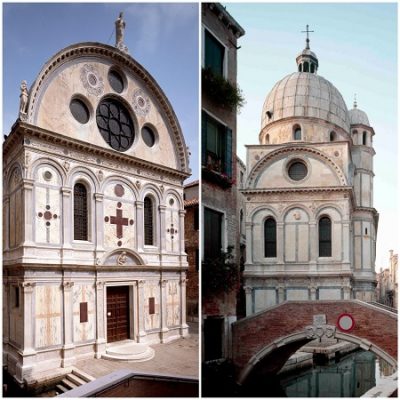 The Renaissance church of Santa Maria dei Miracoli, designed, built and decorated by Pietro Lombardo, is one of Venice’s smallest but greatest architectural treasures. More sculpture than building, this jewel box of a church decked out in polychrome marble both on the inside and outside is just surreal. Located in the middle of a dense web of narrow alleys, canals and Gothic homes, it looks like a slab of marble wedding cake that somehow landed in Venice’s residential Cannaregio neighbourhood.

One of the earliest Renaissance buildings in the city, this church combines the characteristics of Florentine Renaissance with the Venetian love of ornate decoration. In doing so, it also blends Venice’s traditional architectural styles with the classical forms of antiquity. Given its miniature size and architectural significance, the Miracoli is similar to Donato Bramante’s Tempietto in Rome. Both churches feature a mix of classical references and elegant ratios and are considered to be the Renaissance prototype.

The Miracoli is also one of the few churches in Venice that was created by a single architect – Lombardo. Unlike most of the other churches which feature a variety of styles, this one is particularly harmonious in design. The church has a signature Renaissance façade with a semicircular pediment which originated from Florence. Unlike Mauro Codussi who co-pioneered the Renaissance style in Venice with his trademark lobed façades, Lombardo aimed for a more conventional semicircular Florentine design.

Much like the church of Madonna dell’Orto and others, the Miracoli was built to house a specific religious relic. The relic was Nicolò di Pietro’s Virgin Mary icon which would apparently shed human tears in its outdoor shrine. Aided by crowdfunding as a result of this spectacle – and miracles associated with it, Lombardo got to work on a new church. His design creatively repurposed slabs of polychrome marble originally brought by the Venetians from Egypt to Syria for use on the sides of the Basilica di San Marco.

Although lacking any of the usual big-name paintings seen in other Venetian churches, the interior here is impressive nevertheless. The single vaulted nave and the domed apse are marvels of Renaissance engineering, achieved without Gothic buttressing. The main altar with Di Pietro’s icon is reached by steps that rise between two pulpits. The ceiling is divided into fifty panels decorated with paintings of saints and prophets dressed as Venetians. On the whole, the marble wedding cake effect is quite stupendous!