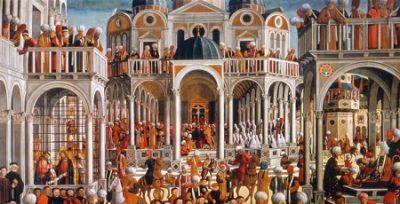 I have complained elsewhere that Giovanni Mansueti, the 15th-century Venetian painter of narrative canvasses, has been unfairly mauled by art historians. Seemingly no punches were pulled in stigmatising his style as primitively stiff and conventional, and his work as mediocre, unattractive and boring. While it’s true that his paintings can be broadly characterised by a desire to cram as many figures as possible into unreal architectural spaces, I see this as evidence of a unique narrative style.

Much of Mansueti’s surviving work was undertaken for the scuole grandi or confraternities that played a central role in the life of Venice. Among his most celebrated works are the series of narrative paintings of the miracles of the Holy Cross for the Scuola Grande di Giovanni Evangelista and of the life of St Mark for the Scuola Grande di San Marco. That Mansueti was able to compete for these prestigious commissions on equal footing with Gentile Bellini – his teacher, or Pietro Perugino speaks for itself.

Mansueti’s Scenes from the Life of St Mark, painted for the latter scuola and now in the Accademia, are part of the so-called ‘myth of Venice’, the continued reaffirmation of the saint’s relationship to Venice by its artists. The typically crowded scene is set in Alexandria, with Venetian-inspired architecture and legions of Christians and Mamluks. On the right, the sultan orders the arrest of St Mark who is arrested in a church in the rear centre, and on the left the saint is visited in prison by Christ and an angel.

Mansueti’s incorporation of three separate scenes with the same character into one continuous work is a nice touch as is the splendid architectural setting for the drama he depicts. The architecture is two-dimensional and decorative, with an element of theatre: the buildings Mansueti creates feel like theatre props. His use of Mamluk garb in depicting early Christian stories is part of Venetian artists’ interest in oriental themes inspired by Venice’s expanding trade and colonialism in the 15th century.

While Venetian art avoided depicting contemporary Ottoman society, there are plentiful images of the Egyptian Mamluks (who were conquered by the Ottomans in 1517) in the context of the early Christian world. Venetian artists would represent the trials and victories of the early Christian Church, which they imagined against a background of partly factual and partly Venetian-inspired architecture and non-Christian figures in Mamluk dress. Mansueti, judging by this work, was on top of this game.