Kyiv’s National Museum of Art holds its own 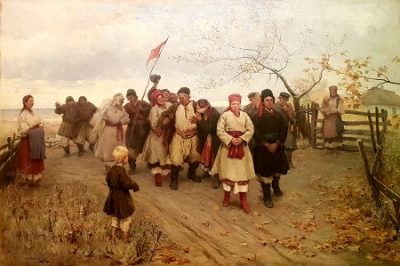 Kyiv’s National Museum of Art holds its own

The National Art Museum of Ukraine, Kyiv’s oldest such institution since 1899, still holds its own even as it now competes with an array of newly opened galleries and independent art spaces. Behind an imposing neoclassical façade, the museum presents a collection of Ukrainian paintings which spans at least a thousand years. It showcases a culture with deep roots in Slavic Orthodoxy and a shared European experience but also one with a distinct and vibrant identity. I was lucky to visit with my mom and dad.

The museum’s story of Ukrainian art opens with a bang – with religious icons taken from different churches in different time periods. As the earliest seat of Slavic Orthodoxy, the Kievan Rus was also the original centre of icon painting. Borrowing at first from Byzantine themes, this school gradually developed its own signature style. Many religious depictions that originated here, such as the iconic representation of St George slaying the dragon, later became widespread throughout the world of Slavic Orthodoxy.

The museum’s collection then progresses to portraits and landscapes reminiscent of European academic painting of the 19th century. While these artworks show Ukraine as a European country, they also reveal distinct elements of its culture and history. There are details of Ukrainian life at the time in the masterful depictions of national costumes, folk tales, Orthodox icons or Cossak uniforms, all of which portray the country in the same way as Vasily Surikov‘s realistic works capture 19th-century Russia.

Climbing up a floor, the museum’s grand internal staircase takes you straight into the modern era. Unlike Western modernism, defined by a radical reversal of established artistic norms, Ukrainian avant-garde of the early 20th century does the opposite: it employs Western modernist techniques to reclaim Ukrainian identity from foreign, mostly Russian cultural dominance. In these artworks, bright, saturated colours emphasise Ukrainian cultural markers to a far greater degree than in the art of the previous centuries.

The draconian ‘decommunisation’ policies of former Ukrainian President Petro Poroshenko could explain why Ukraine’s Soviet art is now almost invisible in this museum. This race to erase Ukraine’s Soviet history remains controversial but it also accounts for Ukraine’s determination to develop a style that would transcend the Socialist realist canon imposed by Moscow back in the day. For one, Ukraine’s Soviet art retains traces of the prior, avant-garde style, such as echoes of Byzantine motifs or Orthodox frescoes.

Much smaller than comparable repositories of art in many other European capitals, this museum has a unique chamber atmosphere. It allows you to transition swiftly from icons to portraits and landscapes and then on to brightly coloured modern art. It’s a journey where artistic styles vary widely but where the thread of a distinctly Ukrainian identity shines through consistently. My parents and I passed through the galleries together or individually – as the shifts in the museum’s moods dictated we should.