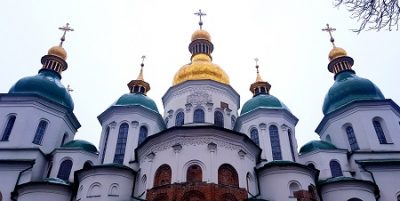 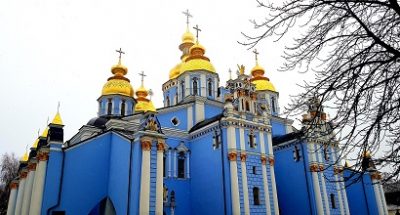 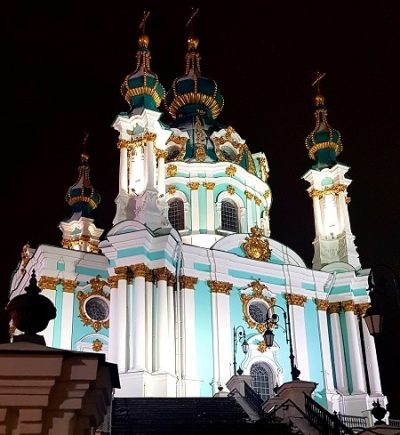 Kyiv, the ancient capital of Ukraine, isn’t called the city of domes for nothing. The oldest of its 950 or so – mostly Ukrainian Orthodox and usually golden-domed – churches date back to the Kievan Rus. This makes Kyiv the source of East Slavic culture which later spread, with Russia, all the way to Siberia and Central Asia. The sheer size and beauty of its monasteries quickly morphed the post-Christmas trip with my mom and dad to this seriously underrated European city into a non-religious pilgrimage.

My love of golden domes has been declared in a post on Russia and while I mention Russia, let me also clear up some contentious signage. Kyiv, which I use here, is the Ukrainian for Kiev, a Russian transliteration of Ukraine’s capital. This does matter given Russia’s hold over Ukraine during the Soviet times as well as before and after. So does the Ukrainian preference for “Ukraine” rather than “the Ukraine”. With the word meaning “borderland”, “the Ukraine” implies the country is a part of Russia and not sovereign.

“The faux Byzantine interior, full of splendid icons and devout worshippers, felt real enough to sway our party of two Catholics and a Protestant to light a candle and meditate”

With that bit of grammar out of the way, I begin, in awe, with St Sophia’s Cathedral whose green and golden domes we spotted from our hotel rooms. This is Kyiv’s oldest standing church dating back to the 11th century even though its most peculiar part – the wedding-cake bell tower is Baroque. The inside is full of Byzantine frescoes and mosaics, many of them original. St Sophia is a votive church, built after the Kievan victory over marauding hordes, where coronations and royal funerals were to be staged.

A short walk across the square with a festive Christmas fair stood the blue edifice of St Michael’s Golden-Domed Monastery. Named after Kyiv’s patron saint, the grand church is in fact a 1999 replica of the 1108 original, which was sadly demolished by Stalin in the 1930s. Although rebuilt, it’s a tribute to the Ukrainian Baroque style. The faux Byzantine interior, full of splendid icons and devout worshippers, felt real enough to sway our party of two Catholics and a Protestant to light a candle and meditate.

A long Uber ride away, on the banks of the Dnipro River towered the Kyivo-Pecherska Lavra, the centre of Christian Orthodoxy in Eastern Europe. This is a place of zealous pilgrimage where Orthodox Christians tread the holy ground alongside tourists, like the three of us, who flock to the Lavra for its sights and atmosphere. The bell tower, which we all climbed up and down a vertigo-inducing staircase, was the tallest free-standing bell tower at the time of construction and remains the highlight of Kyiv’s skyline.

On the last evening in town, in the freezing late December cold, the three of us reached for the stars on top of the hill that is Kyiv’s Montmartre-like Andriyivsky uzviz. This is the home of the stunning gold and blue St Andrew’s Church, a five-domed, cross-shaped Baroque masterpiece. It was built in 1754 by Bartolomeo Rastrelli who also designed the Winter Palace in St Petersburg whose architecture and the colour scheme this church vaguely resembles. The views alone rendered our non-religious pilgrimage divine.