Jacobello does justice to International Gothic in Venice 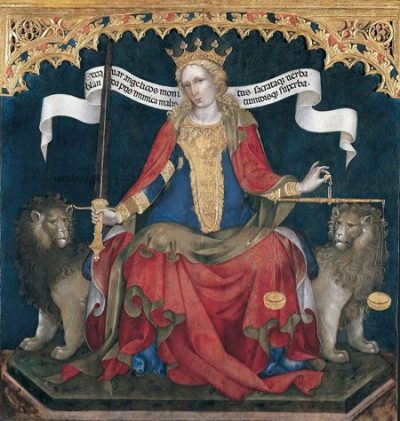 Jacobello does justice to International Gothic in Venice

Like Paolo Veneziano of an earlier generation, Jacobello del Fiore is a transitional figure in Venetian art. His work builds on the simpler and local Early Gothic style championed by Veneziano and then transitions towards a more decorative International Gothic style in its final stages. Instrumental in Jacobello’s growth was Gentile da Fabriano from the Marches whom Venice asked to decorate, before an eager audience of local artists, the Doge’s Palace with his International Gothic fables, later destroyed in the 1577 fire.

Jacobello’s mature works are mostly painted on panels, correct in perspective and minutely detailed with their apparent realism combined with rich symbolism. The faces and drapery in these paintings are rounded, soft and precise. Whether religious or secular, these works reflect the sophisticated and cosmopolitan nature of courtly life that transcends the strict geographical boundaries of the Early Gothic style. As such, their international feel acts as a final bridge between Gothic and Renaissance art.

The panel that probably marks the peak of Jacobello’s stylistic shift towards International Gothic happens to be a secular work and one of his largest, more than four metres in width. Justice between the Archangels Michael and Gabriel or simply The Triptych of Justice was originally painted for the Doge’s Palace but now hangs at the Accademia. The picture is loaded with symbolism, starting with the fact that it was commissioned exactly a thousand years after the legendary founding of Venice in 421 AD.

The legend has it that God himself founded the city as salvation for the Christian world following the fall of the Roman Empire. The painting depicts Justice, holding a sword and scales and seated upon a leonine throne. Justice is the primary virtue claimed by the Venetian state so the central figure represents both justice and Venice. The scroll behind her reads: “I will carry out the admonition of the angels and the holy word: gentle with the pious, harsh with the evil, and haughty with the proud.”

On the left panel, Michael battles a dragon while on the right panel Gabriel points to Justice. The level of detail here shows Jacobello’s mastery of the International Gothic. The intricacy of the fabric, skin, hair and the details such as the halos are supreme as is Jacobello’s consistency in texturing and shading. The depiction of animals is rare for the artist so the two Venetian lions that flank Justice are both a nod to Venice and to the artist’s skill. There was nowhere to go from here, but Renaissance.