Dürer in Venice and The Feast of the Rosary in Prague 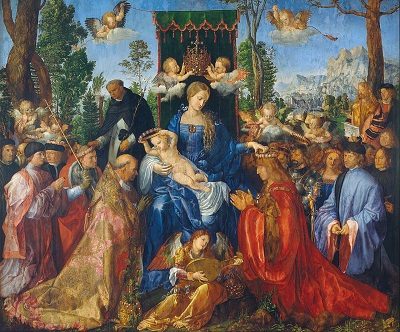 Dürer in Venice and The Feast of the Rosary in Prague

Albrecht Dürer’s reputation as one of the greatest artists of the northern Renaissance rests largely on his knowledge of the Italian art of the period and of German humanists, and his artistic conflation of the two. As one of the distinctively modern men of the Renaissance and, by his own description, a Venetian gentleman based on his two visits to Venice, Dürer would later portray himself in fine clothes, not as a simple German craftsman like his father, a goldsmith in Nuremberg, but as a glamorous international artist, a man of style and sophistication. He was credited in his lifetime – and beyond – with bringing the proportion and perspective of the Italian Renaissance to northern Europe.

At least from the 13th century, the Venetians were interested in the art of the northern European countries at the same time as they were engaging in trade with them. This artistic influence was reciprocal but with Dürer’s two sojourns in Venice it took on the form of a study exchange. The result is a confrontation between the northern and southern Renaissance, not least in Dürer’s work: realism versus the ideal, Gothic storytelling versus classical grace, muscular portraiture versus vibrant colour. Dürer’s pictures of people from his Venetian visits reflect the soft portrait types favoured by Giovanni Bellini, and form a solid bridge between the Renaissance art of the north and the south.

Dürer who was also a supreme graphic artist in the German tradition of printmaking, similarly allowed his prints to tap into the new knowledge gained from Renaissance Italy. His woodblock printing improved on a technical level, through the use of intricate details and subtle gradations. His later prints also became known not only for their smoother perspective but a rediscovery of classical motifs. By fusing these southern elements with everyday life sources, Dürer started deploying Renaissance aesthetics to rather populist ends. He was perhaps among the first to realise the freedom this mass medium offered the artist: he could publish and sell his own woodcuts to the widest audience.

Dürer’s second visit to Venice is also responsible for a curious paradox in the artist’s legacy. He is known and revered by the Lutheran Church for his deep religious feeling, which led him to side with the leaders of the Reformation, but he is also the artist of The Feast of the Rosary – arguably Dürer’s best painting and a depiction of the ultimate in the Roman Catholic religious dogma: the Virgin Mary and the Rosary. The altarpiece was commissioned by the German merchants in Venice who belonged to the confraternity of the Rosary for the German church of San Bartolomeo. The work was later acquired by Emperor Rudolf II who had it moved from Venice to Prague where it now hangs at the National Gallery.

The painting reveals a meeting of German and Venetian artistic techniques. It depicts the Virgin and the Child, with two angels who are holding, above her, a royal crown. This was a Flemish scheme already widespread in the northern art. The two rows of figures are headed, on the left, by Pope Julius II with a religious procession, and, on the right, by the German Emperor Maximilian I with a lay procession. This, together with the guitar playing angel in the centre, is reminiscent of Giovanni Bellini’s sacre conversazioni. The Venetian influence is also evident in Dürer’s Virgin who is dressed in Italian fashions. The vibrant colours, applied to sumptuous effect in semi-transparent layers, are just as Venetian.