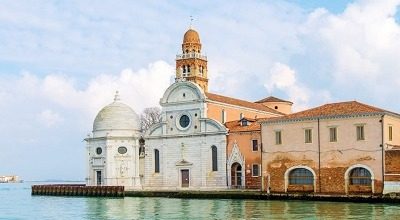 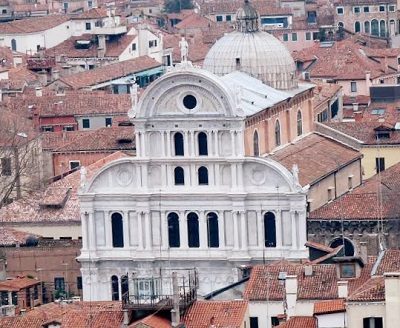 Mauro Codussi, one of the most innovative and versatile architects in Venetian history, of whom is otherwise known very little, has changed the face of Venice forever. A genius at blending the city’s traditional styles with the classical forms of antiquity, Codussi signals the change of Venetian architecture from Gothic to Renaissance. In many buildings from his diverse portfolio, which includes the churches of San Michele in Isola and San Zaccaria, as well as Torre dell’Orologio and Ca’ Vendramin Calergi, he was the first architect to use white Istrian stone as cladding in his trademark lobed façades.

The signature Renaissance façade is an ingenious design that originates from Florence where it first appeared in the works of Leon Battista Alberti. At the Florentine church of Santa Maria Novella where the upper façade was constructed to the design of Alberti, the architect solved the problem of visually bridging the different levels of the central nave and much lower side aisles with the use of two large scrolls on the sides. These became a standard feature of church façades in the Renaissance – and even in the Baroque – to bridge the space between horizontal and vertical surfaces.

Only a few years after its debut in Florence, Codussi created a lobed façade – notably more rounded and sans the scrolls – at the church of San Michele in Isola on the eponymous island that has been Venice’s cemetery. The miniature San Michele in Isola is the first Renaissance church of Venice and one that clearly embodies Codussi’s quest to achieve an ideal. It was also the first church in Venice to sport a snow-white façade made of Istrian stone, a feature adopted by later architects, including Andrea Palladio, and celebrated by Francesco Sansovino, son of Jacopo Sansovino, in his book Venetia citta nobilissima et singolare.

In another of Codussi’s Venetian masterpieces, the church of San Zaccaria, Antonio Gambello was the original architect who started the building in the Gothic style. Codussi completed the upper part of the façade with its arched windows and columns in the early Renaissance style many years later. It was a challenging task because the two designs were quite different, but Codussi came up with a perfectly proportioned façade to tie together various elements of an earlier architectural style. By simply respecting what was already in place, Codussi created a harmonious Venetian mixture of late-Gothic and early-Renaissance styles.

There is now evidence to link Codussi to a third Venetian showpiece that is the Torre dell’Orologio in the Piazza San Marco. Although Codussi was not responsible for the inner workings of this marvel of 15th-century engineering, he was its architect which is a feat in its own right. Codussi also designed the beautifully proportioned Ca’ Vendramin Calergi on the Grand Canal which is the palazzo where Richard Wagner stayed – and died. Its façade is an interplay of classically inspired columns and tall French windows with a magnificent piano nobile. As a residential building, it is further proof of Codussi’s versatility and genius that have transformed Venice into what it is today.