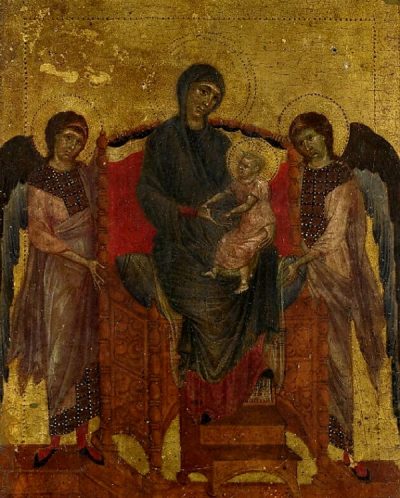 Great Britain’s only Cimabue, The Virgin and Child with Two Angels, which hangs at the National Gallery in London, marks both the beginning and the end of an era. Also known as Cenni di Pepo, Cimabue has been simultaneously described as the last painter of the Italo-Byzantine style and one of the first great painters to break from it. This suggests that the transition from medieval to Renaissance art, which he represents, was fluid rather than sudden.

This painting is a small-scale representation of the monumental versions of Cimabue’s Maestà which he painted on panel for Santa Trinita, Florence, and San Francesco, Pisa. Stylistically, it appears firmly rooted in the Italo-Byzantine or Greek style – maniera greca – with its heavy use of gold in the background, hieratic scale of the Virgin in relation to the Angels, and the compartmentalised composition of the portrayed figures, all of which also appear flattened and elongated.

The Italo-Byzantine style’s virtually only spatial cue for indicating three dimensional space – overlapping – is on display here as the contours of the Angels are interrupted by the contours of the Virgin’s throne and one thus visually supersedes the other. The overall composition, however, remains quite flat, with only the subtle signal of the overlapping of garments to show that the Child is placed in front and the Virgin is sitting farther back on the throne itself.

Cimabue’s composition nevertheless attempts to capture three-dimensional space by placing the wooden throne at an angle. This is one of the earliest examples of linear perspective which creates the illusion that the furniture grows smaller and converges toward a vanishing point at the horizon line. The throne is too small for the full effect of convergence toward a vanishing point and not exactly conceived in relation to the contours of the human body of the Virgin who is sitting on it but this is still an innovation.

Overall, Cimabue’s The Virgin and Child with Two Angels reveals a definite shift towards naturalism seen in early Renaissance painting, both stylistically and in content. The figures here are depicted with more life-like proportions and shading than many others of the artist’s time and the Christ-Child clings to his mother’s hand like a real baby, instead of raising his hand in blessing usually seen in Italo-Byzantine art. Cimabue thus succeeds in this painting and in general in making his subjects fundamentally more realistic to the viewer.