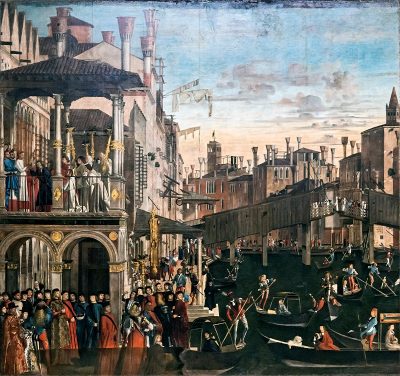 One of the great topographical paintings of Venice, Vittore Carpaccio’s The Miracle of the Relic of the Cross at the Ponte di Rialto combines the miracle with a bustling scene at the Venetian Rialto – the international marketplace at the financial heart of the medieval city. The miraculous event is somehow relegated in a wide loggia in the upper left corner while most of the canvass is occupied by a veduta of the Rialto with a great number of characters and naturalistic items. This combination of architectural detail and social activity does eclipse the very subject of the picture but it also provides a great insight into inner workings of the economic centre of Venice.

Carpaccio’s painting of 1496, now at the Accademia, purports to show the miracle of the healing of a madman through the relic of the Holy Cross, held by the Patriarch of Grado Francesco Querini which took place in the Palazzo a San Silvestro near the Rialto Bridge. It is part of a series of paintings commissioned by the confraternity of the Scuola Grande di San Giovanni Evangelista to commemorate stories of the miracles performed in Venice by the fragment from the Holy Cross which the institution had acquired in 1369. It complements the other eight pictures from the same series, particularly Gentile Bellini’s Procession in the Piazza San Marco. Side by side, the two pictures celebrate the twin religious/political and economic hearts of Venice.

Like in Bellini’s picture, there is a busy multi-cultural mix of Venetians in red and black togas, Armenians in black hats and turbaned Turkish or Arabic traders. White-robed members of the Scuola process across the bridge, while below it gondoliers carry their passengers on the Grand Canal, and on a high ledge above, a woman beats her carpet. There is an extraordinary flurry of activity, colour and light. It is also a pictorial representation of Venice’s seemingly effortless wealth resting on its mastery of navigation and trade. This was very much how the city struck visitors at the time. When the French ambassador Philippe de Commines arrived in 1494 – only two years before the creation of Carpaccio’s painting, he was astonished. “I have never seen a city so triumphant,” he declared.

The painting also lays out, in magisterial detail, what Venice would have looked like at the height of its power. Carpaccio not only provides an atmospheric picture of the typical inverted cone chimneys of medieval Venice but also captures architectural details that no longer exist. His Rialto Bridge is still in wood, as it was before it collapsed in 1524. Like the current stone masterpiece by Antonio da Ponte from 1591, it had a double row of shops at the sides and, at the top, a movable boardwalk to allow for the passage of large vessels below. On the painting’s right is the 15th-century appearance of the Fondaco dei Tedeschi which was destroyed by a fire in 1505 and replaced with its current incarnation in 1506. All in all, an image of a triumphant city, as Ambassador De Commines put it.