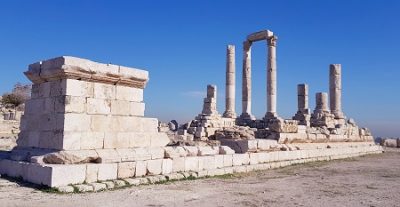 Amman, Jordan’s oversized capital, is an atmospheric destination in its own right. Often seen merely as a pit stop on the way to Petra, the city’s urban grit, boxy homes, honking taxis and falafel stands all combine into a unique vibe. Its rolling hills – originally seven but now about twenty – are also dotted with many ancient ruins. Like elsewhere, these are the result of cyclical construction, re-use and expansion by the Persians, Greeks, Romans, Byzantines and the Umayyads in the space of some 2000 years.

Amman, known as Philadelphia in Hellenistic times, was laid to waste much later – in the historic 749 AD earthquake. For centuries thereafter it was reduced to a backwater until it became the capital of Jordan in 1921. It has absorbed large numbers of Palestinians who now outnumber the local Arabs. Despite the ever changing hands and the cataclysmic destruction, its surviving ancient structures have a Roman feel. In a country where Roman ruins reign supreme, Amman ought to be everyone’s first stop.

Towering above the city and visible from afar is the Amman Citadel. It’s reachable by taxi but I climbed the hill the hard way through a succession of stairwells with sweeping views over Amman – and into people’s homes. The Citadel complex is unexpectedly large – a rambling collection of Roman, Byzantine and Umayyad ruins. Its highlight, the Temple of Hercules was built by the Romans and today only a few parts of it remain, including two massive columns topped with an arch, all of this surprisingly intact.

Seen from the Citadel and, as it turned out, next to my hotel was the Roman Theatre, Amman’s pièce de résistance. Built into the hillside in the 2nd century AD but still looking as new, the amphitheatre can seat 6000 spectators. I climbed some 100 steep steps to the top seats for a staggering view over this part of Amman and I could hear everything that was said by other tourists on stage. The Romans were clearly masters of acoustics. The structure was also oriented north to keep the sun off the spectators.

A short distance from the Roman Theatre stands the Nymphaeum, a partially preserved Roman public fountain. It’s believed to have contained a 600-square-metre pool which was three metres deep and, in its heyday, continuously refilled with water. Built in 191 AD, this two-storey complex with water features, mosaics and stone carvings was dedicated to the nymphs, hence its name. Among the toppled columns and many alcoves, there is vibrant cat life. Some of the cats were friendly and others not so much.

For my Levantine dinners, I twice headed to Amman’s famous Rainbow Street – a cobblestone lane flanked by tourist shops. In addition to great local food, countless juice stalls and a chance to people-watch, Rainbow Street is the place to walk. In a city as pedestrian-unfriendly as Amman where the hills sap your energy, the traffic runs amok and where few sidewalks exist and those that do are always obstructed by trees and parked cars, this is a big deal. The locals and other visitors seemed to think so, too.