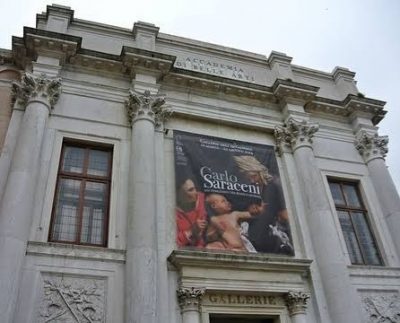 Home to pre-19th century masterpieces of Venetian painting, the Gallerie dell’Accademia, or simply the Accademia, is Venice’s principal art museum. It’s housed in three conjoined buildings which include the Scuola della Carità, the church of Santa Maria della Carità and the Convento dei Canonici Lateranensi. The museum’s minimalist, mainly interior, restoration is the post-war work of Carlo Scarpa. The bulk of its collections come from Napoleon’s mass looting of art from various religious institutions around town.

The museum was born in 1750 as the gallery of the art academy of Venice. Its first director and president were painters Giovanni Battista Piazzetta and Giambattista Tiepolo, respectively. The museum initially collected works of painters and sculptors who were students of the academy. During the Napoleonic occupation of Venice in 1807, the institution was moved to its current location and its collections absorbed artworks confiscated from various churches, convents and scuole grandi across Venice.

The original Scuola della Carità, through which the art museum is entered today, was the oldest of Venice’s six religious confraternities, or scuole grandi. Three major Venetian architects have shaped the complex. Bartolomeo Bon completed the Gothic façade of the adjoining church in mid-15th century and then, a century later, Andrea Palladio started work on the convent but it was never fully completed. The museum first opened to the public in 1817 and by 1879, it became independent from the art academy.

On the inside, the Palladian complex and the adjoining Gothic church appear surprisingly open, airy and modern. This is the contribution of Scarpa. Starting in 1949, this modernist architect, himself a student at the art academy previously linked to the Accademia, redesigned the museum’s outdated exhibition rooms by opening up new spaces and adding panels and staircases. In doing so, he vastly enhanced the general museum experience by improving lighting, labeling of artworks and visitor traffic flow.

The Accademia’s 20-plus rooms can be more than a little overwhelming under the sensory overload of the Venetian greats. The Bellinis, the Vivarinis, Giorgione, Titian, Veronese, Tintoretto, Tiepolo, Canaletto, Guardi and dozens more masters from the 13th to the 18th centuries do a great job showcasing, individually and collectively, Venice’s precocious flair for colour and drama. They ensure that this collection holds its own against the competition scattered around the city’s many palazzos and churches.